I just recently wrote on David Ortiz, who is getting his number 34 officially retired on June 23 of this year, but with all due respect to Big Papi who will most likely be a first ballot Hall of Famer, he is no Edgar Martinez.

Jeff Bagwell, Tim Raines, and Ivan Rodriguez were elected this year while Vladimir Guererro and Trevor Hoffman came within a few votes of immortality. Martinez, on the other hand, had a nice jump from last year, going from 43% in the 2016 Hall of Fame Election to 58.6% in the 2017 Hall of Fame voting. While that is a very good jump, he is still 16.4% short of being elected to the National Baseball Hall of Fame with only two more years on the ballot.

Martinez’s number 11 will be retired by the Mariners in a ceremony on Aug. 12 before a game against the Los Angeles Angels. Number 11 will join the number 24 of Ken Griffey Jr. as the only two numbers retired by Seattle, along with Jackie Robinson’s No. 42, which is honored across the entire MLB. I think I speak on behalf of all Mariners fans (not that I am one) when I say that it is about time.

Baseball purists are almost guaranteed to not vote for Martinez because he was almost exclusively a DH. Despite that, he was one of the best hitters in the game for about a decade.

Along with his incredible amount of doubles in such a short amount of time, he also has a respectable 309 career home runs. That may not sound like a whole lot for a Hall of Famer, but you have to remember, he was not given a legitimate shot at playing Major League Baseball until he was at the age of 27. Plus, he played his entire career in a home run suppressing ballpark in Seattle, while batting .312 in his career.

Martinez’s 147 OPS+ is also tied with Hall of Fame players, Mike Schmidt, Willie Stargell, and Willie McCovey, and his .933 OPS is 33rd in all of baseball history. 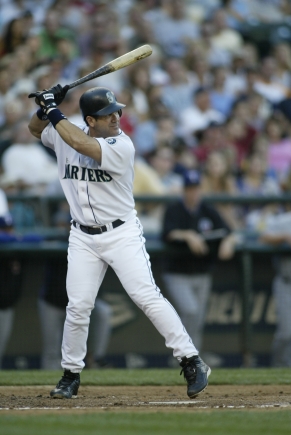 On-base percentage is the most important stat in baseball. To have a high on-base percentage, you have to be good at not creating outs. Edgar Martinez’s .418 career OBP ranks 21st in the history of Major League Baseball. If we only include Hall of Fame-eligible, retired players, he’s 18th.

Who has ever heard of the Edgar Martinez Outstanding Designated Hitter Award? It is basically the award given to the best DH in the American League. It was named after the DH that won the award five times in his career, can you guess who?

Edgar Martinez struck fear into the hearts of opposing players, and if you don’t believe me, then here are a few examples of players that feel that Martinez should be in the Hall of Fame.

“The toughest guy I faced I think — with all due respect to all the players in the league — was Edgar Martinez. He had to make me throw at least 13 fastballs above 95 (each time we faced). I was hard-breathing after that. Edgar was a guy that had the ability to foul off pitches, and it pissed me off because I couldn’t get the guy out.”- Pedro Martinez

“The toughest — and thank God he retired — Edgar Martinez. Oh, my God. I think every pitcher will say that because this man was tough. Great man, though — respected the game, did what he had to do for his team. That’s what you appreciate about players, when a player come and do what is right for the game of baseball, for his team and teammates.”- Mariano Rivera

“Edgar Martinez is hands down, the best hitter that I’ve ever seen. I’m glad I didn’t have to face him too much. Having seen him play from ’89 to all the way when I left, I got to see him a lot against great pitchers. Like I said, hands down, he is the best pure hitter that I got to see on a nightly basis. And I hope that his time comes soon, that he gets a phone call stating that he’s a Hall of Fame player because he is.”- Randy Johnson

“Edgar deserves to be in [the Hall of Fame]…There are a lot of guys with similar numbers who should be there, and Edgar’s definitely one of them. He carried the team for a period of time. He was one of the most feared hitters in the game for 10-plus years.” – Ken Griffey Jr.

“I think the writers have spoken in my case, and they will again in the future. They’re not going to hold [being a DH] against you. It’s part of the game and should be included as such. He [Edgar] was one of the most feared right-handed hitters for a long time in this league. The amount of respect he has from peers speaks to the value of the offensive player he was.” – Paul Molitor

“Edgar deserves to be in. I played with the guy. I know what he’s done.”  – Ken Griffey Jr.

(all quotes above came from the article: Mariners making a push for Edgar Martinez’s Baseball Hall of Fame candidacy)

I have proven that Edgar Martinez is arguably the greatest DH of all-time and should have been in the Hall of Fame a long time ago. The fact that he has stayed on the ballot for eight years absolutely amazes me. I believe that his stats 100% prove that he should be in the Hall of Fame. He is getting far more support from the media recently, and I believe that Martinez will have no trouble getting the 16.4 percent he needs for election and will join Hoffman and Guererro in the 2018 hall of Fame election. Even if he doesn’t succeed in 2018 he will almost be guaranteed to pull off a Tim Raines-like election.

4 thoughts on “Should Edgar Martinez Be in The Hall of Fame? (Giuseppe)”