With his unorthodox batting stance and swing, accompanied by his humility, determination, and tenacity, the quiet and uncontroversial Stan Musial became one of the greatest and most beloved baseball players in Major League history. 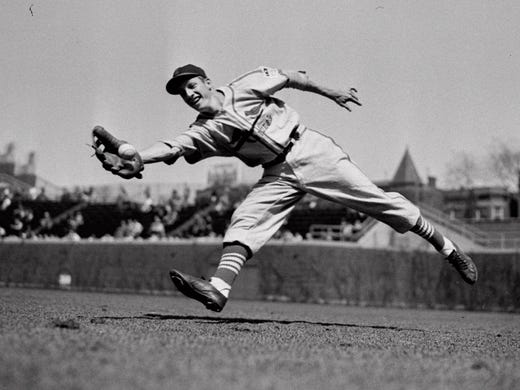 Stanley Frank Musial or Stan “The Man” as he would come to be affectionately called by Cardinals and baseball fans alike, was born on November 21, 1920, in Donora, Pennsylvania. Musial began his professional baseball career as a left-handed pitcher in 1938 and was picked up by the St. Louis Cardinals.

Fortunately for Musial, he injured his left shoulder while diving for a ball in the outfield (where he was playing due to a shortage of players). Following his injury, Musial turned to focus on hitting and was a stud in his first two years in the Minors doing so (hitting .352 in his first and getting called to the show late in his second). Musial would receive a call-up late in the 1941 season and was about to take the league by storm.

While Ted Williams and Joe Dimaggio were running the American League in 1941, Musial was just getting started in the National League, hitting .426 in 12 games before the season’s end. In 1942, Musial began his rookie campaign and hit .315 and finished 12th in the National League Most Valuable Player Award voting.

Musial did not experience a sophomore slump his next year and hit .357 and won the Most Valuable Player Award (his first of three in his career). From then on, Musial would hit .310 or higher 17 times and would be selected to play in 24 All-Star Games, would win three MVP Awards, collect two Major League Player of the Year Award honors, win seven batting titles and win three World Series titles with the Cardinals. Musial easily cemented himself in history as the greatest St. Louis Cardinal to ever wear a uniform.

“Unless you give it all you’ve got, there isn’t any sense in playing,” Stan Musial said.

“He could have hit .300 with a fountain pen,” said Joe Garagiola.

During Musial’s career, he was a terror for pitchers. Here are some of the things that pitchers that faced him had to say about “The Man”.

“I’ve had pretty good success with Stan by throwing him my best pitch and backing up third.” – Carl Erskine

“Once Musial timed your fastball, your infielders were in jeopardy.” – Warren Spahn

“I could have rolled the ball up there against Musial, and he would have pulled out a golf club and hit it out.” – Don Newcombe

In 1968, Musial was awarded the Freedom Leadership Medal. Stan was elected to the National Baseball Hall of Fame in 1969 on his first appearance on the BBWAA ballot. Musial compiled 93.2 percent of the votes, easily surpassing the required 75%.

Legendary sportscaster Bob Costas described Musial best in an episode of ESPN SportsCentury, saying, “He didn’t hit a homer in his last at-bat; he hit a single. He didn’t hit in 56 straight games. He married his high school sweetheart and stayed married to her, never married a Marilyn Monroe. He didn’t play with the sheer joy and style that goes alongside Willie Mays’ name. None of those easy things are there to associate with Stan Musial. All Musial represents is more than two decades of sustained excellence and complete decency as a human being.”