Bob Gibson. Nolan Ryan. Roger Clemens. Jack Morris. Randy Johnson. Madison Bumgarner. These are pitchers who are men. Who fight, push, and claw their way to a victory for their team. Fireballers who don’t just pitch, but inspire and carry their team on their broad muscled shoulders. Who don’t need ice for their shoulders or utensils to eat meat when they can eat it with their bare hands. THOSE were MEN! At least – the way some would describe it. Yet as we watch the death of the complete game starting pitcher and rise of bullpening, is it sustainable and what will the after-effects look like?

Over time, and certainly influenced by analytics, we see fewer starting pitchers pitching deeper into games. There is frankly a mound of evidence to support this, and is really one of those examples where the statistics simply prove out the generally accepted “gut feeling” most managers have that by the third time through opposing hitters have figured out the pitchers tendencies.

The Rays started the trend of using a relief pitcher as an “opener” this season, an idea long adored by sabermetricians but only a team like the Rays hiding down in Tampa Bay could start. Rays Manager Kevin Cash hinted at the idea last winter when he pointed out, “I think with all the information out there right now, it’s pretty telling, we can find other ways to allocate those quality pitches, rather than the back-end pitchers.”

So they did just that. As the Rays “started” 8 different relievers over 50 starts, they managed to beat the league-wide ERA by about 0.20. Those who have long believed in the Bill James way of life have always asserted that closers are over-rated, in the sense that 3 outs in the 9th should be no different than 3 outs in the 6th or 3 outs in the 1st. Yet – the game would tell us that isn’t the case either. Take a look at this chart from beyond the box score:

The Rays helped to neutralize that first inning with a reliever who is trained to pitch in 1 inning. Tom Glavine had a career 4.58 1st inning ERA. His 2nd inning ERA was 2.83 and of course his lifetime ERA for his Hall of Fame career was 3.54. Imagine if he had been able to cut down just 50 runs in the first inning? That 1st inning ERA would drop under 4 and his lifetime ERA would’ve dropped 10 points to 3.43. Like Rays prospect Jalen Beeks says, “Everybody thinks it’s a little weird, which it is, because it’s new. Everything’s weird when someone does it first. This could change the game.”

This could change the game. In the 2018 Post-Season, the A’s used a bullpen by committee for the wild card game. The Milwaukee Brewers did the same for nearly the entire playoff run – though Alex Putterman of the Atlantic would warn us that the bullpen narrative is more confirmation bias proving what already happened – not that teams with the bullpen strategy will actually win the World Series. He offers a solution simply:

The chief reason for this trend is fairly simple: Relievers are better than they have ever been. Whereas bullpens were once filled with soft-tossers who had failed to stick in the rotation, they’re now populated largely by flame-throwing strikeout machines specifically trained for their roles.

This does not necessarily mean that starters have gotten weaker. Yin does not always indicate a corresponding yang. Certainly don’t tell Justin Verlander, Max Scherzer, or Clayton Kershaw that anyway.

This strategy can have its downsides as well. The Brewers faced major bullpen fatigue issues down the stretch as their nearly entire September was a playoff atmosphere that resulted in the best record in the National League. Not to mention Craig Kimbrel’s October struggles.

The market is still adjusting to this change. Last year the Rockies bet big on reliever arms – which largely blew up in their faces. They shelled out $106M for three relievers: Bryan Shaw, Wade Davis, and Jake McGee. McGee and Shaw didn’t even make the post-season roster.

No longer can you count on the starter going 6, with a strong closer, hopefully a good setup man, and mix and match until then. Put one way by Oddshark.com: “A club could have a great bullpen ERA with a money closer and solid setup relievers, but if the reliable middle relief arms have worn down from overuse like the soles of a Converse sneaker, or have been getting rocked early, the setup man and closer may never take the mound.”

As this trend continues it will be interesting to see the market reacts and how of course how pitchers react. The innings that bullpens throw has continues to rise, setting a new record again last season as shown by this chart from fivethirtyeight.com: 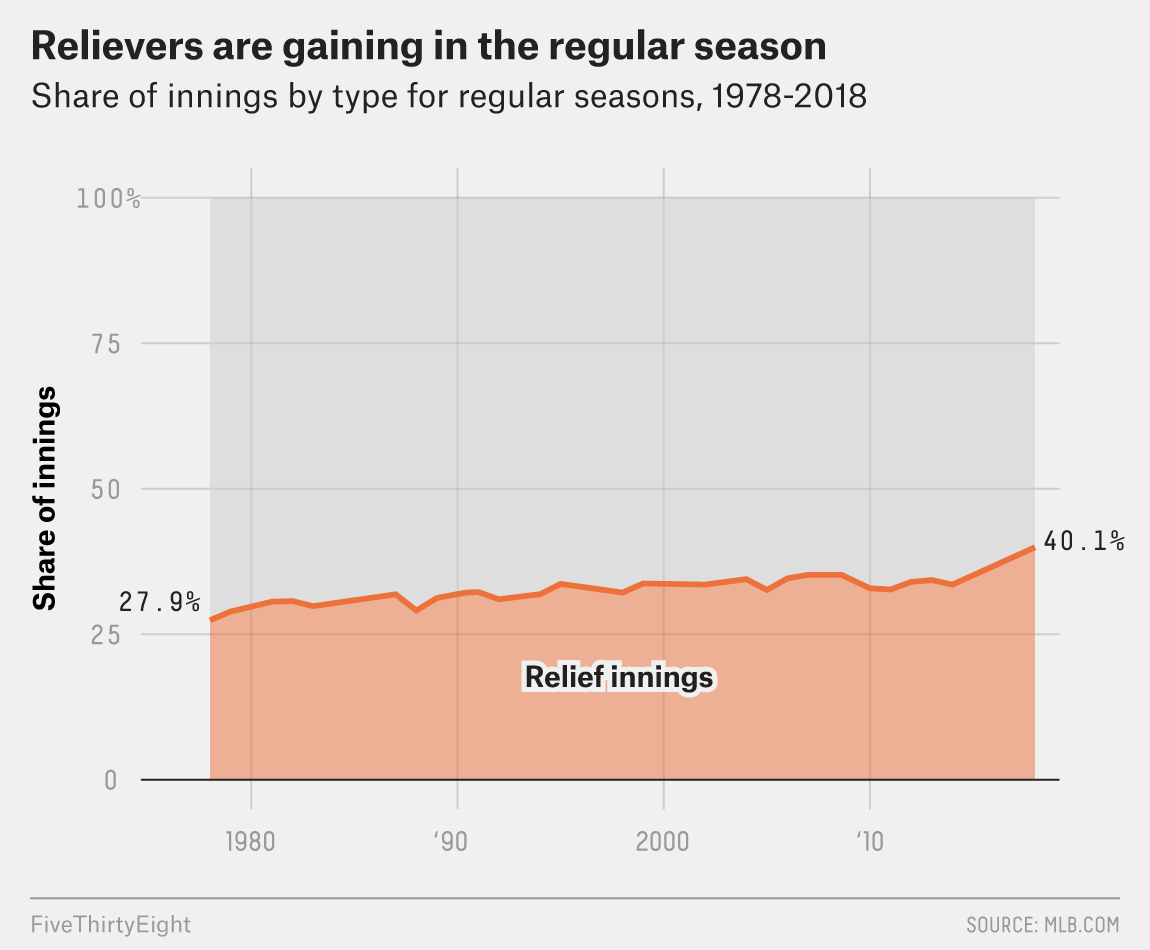 However – the individual composition is much different. The most innings pitched by any pitcher as a starter in 2018 was Clayton Kershaw who pitched 29 innings in 5 games. By contrast in 2014 Madison Bumgarner pitched nearly 48 innings as a starter in 6 starts. He pitched of course over 52 innings total in that one post season.

So as head towards the 2019 season it will be interesting to see how pitchers are used overall. With only so many roster spots – it might be better to keep only 3 “traditional” starting pitchers who you can count on for 5-7 innings than a 5th starter who is unlikely to keep your team in the game.

Mariners GM Jerry DiPoto acknowledges that “Some form of bullpening is the future of baseball. Its just a matter of the extremity”. He went on to acknowledge the Mariners true strategy:

We look at building a pitching staff as not just 1 through 12, but 1 through 20. And they’re not going to be household names. They’re not going to be guys that are on the front page of USA TODAY. They’re going to be guys that most fans have never heard of, but that our scouts, that our analysts believe can come in and, when it’s their time to step in, get us across bridges.”. What diPoto is saying is that outs in any form – are outs.

Indeed – making the rare breed of pitchers who do top 200 innings valuable for the long term team solution. Just 13 did it last year after only 15 did it the previous two seasons. In line with this need is of course…money. The average starting pitcher made $6M in 2017 and the average reliever just $2.3M. So if you can find durable relievers to fill the spots of starting pitchers – you win on the field and in the check book.

Baseball teams are seeing the increased value of bullpens – if by no other metric in that more position players than ever before pitched in 2018. If you are in a blowout – why use up some innings of your vaunted bullpen innings? Over 50 position players pitched last season, and this might happen more next year. Do we really want to watch guys like Adam Dunn pitching? (Well – maybe…)

While finding new ways to finish the same game we have played for over 150 years is exciting – it might lead to union problems down the road. The players union wants its players paid as much as possible. If starting pitchers in the majors go down – and the corresponding reliever salaries don’t go up accordingly, the salary goes down. If position players are used increasingly more to take reliever innings – or more importantly get hurt while doing it – the union will not be happy.

So on to 2019. How the pitchers will be used will be a big piece we watch next season. For all the talk about bullpening, it was the Dodgers and Red Sox in the World Series. Not the bullpening Brewers or the patchwork A’s. It was the Dodgers who won the National League- who had a starter go at least 6 innings 4 of the 5 games. It was the Red Sox – who had powerhouse starters Chris Sale, David Price, and their only starter who actually topped 200 innings in Rick Porcello.

Braves fan my whole life, Padres since I went down to UC San Diego for college in 2001. Petco Park is like a little bit piece of heaven here on Earth. Currently living in Oregon. View all posts by Daryll Dorman