The long-awaited return of the Phillies’ grandest acquisition this offseason Bryce Harper certainly lived up to the hype and then some, making Tuesday’s game between the Philadelphia Phillies and the Washington Nationals Doubleday Double Talk’s Game of the Day.

Bryce Harper ended his seven-year career as a National after becoming a free agent this past offseason when he signed a 13-year, $330 Million deal with the Nationals’ hated division rivals, the Philadelphia Phillies. Little did Harper know that he would become the most hated player in Washington after the Nationals also gave him an offer, but he chose the Phillies instead.

In his Nationals tenure, Harper led Washington to four postseason berths, won a National League MVP award, and won the All-Star Home Run Derby in front of his home fans, but in his return to the nation’s capital, Harper was given a villain’s welcome.

Bryce Harper came up against Max Scherzer in the top of the first inning and was immediately showered with a loud chorus of boos and heckling from every Nationals fan in the ballpark. Max Scherzer would then take Harper to a 0-2 count, throw two more balls, and then strike out Harper with a changeup much to the excitement of Nationals fans who erupted with cheers after the strikeout.

Nats fans were not happy when Bryce came to the plate … pic.twitter.com/NFzO0KdJZm

Round 1 goes to Max. pic.twitter.com/bbM1znBWce

Harper would face Scherzer in the third inning after Maikel Franco got the Phillies on the board in the second with a solo shot off Scherzer to make it 1-0 Phillies. Harper, once again facing Scherzer, would strike out on a 3-2 cutter. The Phillies would tack on another run in the fourth when catcher Yan Gomes was unable to block a Scherzer pitch in the dirt and Odúbel Herrera came in to score from third.

Harper faced Scherzer one last time in the top of the fifth and hit a double to right with a runner on first. Despite Harper’s efforts, the Phillies would not score again in the fifth.

After five innings, both Max Scherzer and Zach Eflin’s nights were over with Eflin outpitching Mad Max and tossing five shutout innings with nine strikeouts, three hits, and a walk. Scherzer put up five innings solid innings himself, surrendering a pair of runs (one earned) with seven hits, a walk, and nine strikeouts.

In the sixth inning, the Phillies came at reliever Wander Suero with a vengeance and after a leadoff double by Odubel Herrera, a strikeout, and an intentional walk, Dave Martinez brought in Matt Grace to get out of a first and third jam. Grace opened with a strikeout and then walked Andrew McCutchen to load the bases for Jean Segura who ripped a grounder down the right field line to bring in three runs. With Segura in scoring position, Harper came up and lined a single to left to make the score 6-0 in the Phillies favor.

Anthoney Rendon would come up in the bottom of the sixth with a runner on and hit a two-run home run, this would be the only scoring of the game for the Nationals.

Bryce Harper would come up for his final plate appearance in the top of the eighth with a runner on and on a fastball from Jeremy Hellickson, Harper crushed a home run into the second deck in right field before flipping his bat in triumph.

Harper DESTROYS one to right!

Get used to it, Washington. pic.twitter.com/O3j9nB8poa

Here is the bat flip:

Bryce Harper had an EPIC bat flip after homering vs. his former team.@DTrainMLB loved every second of it (SOUND UP!) pic.twitter.com/VCJJwxaW0k

The score was now 8-2 in the Phillies favor and Harper had just silenced a crowd of more than 35,000 with one swing. Once a hero in Washington Bryce Harper was now public enemy number one to Nationals fans across America.

The game would end in the ninth with all the damage already done, and all the Nationals fans that so passionately booed Harper and cheered on his strikeouts could do nothing but leave the park that Harper once called home with their tails between their legs.

This game was moment that Bryce Harper went from a hero to a villain in the city of Washington, from an icon to an antagonist, and from a savior to an adversary. Bryce Harper is a Philly to stay and for Nationals fans, this is going to be a long 13 years. 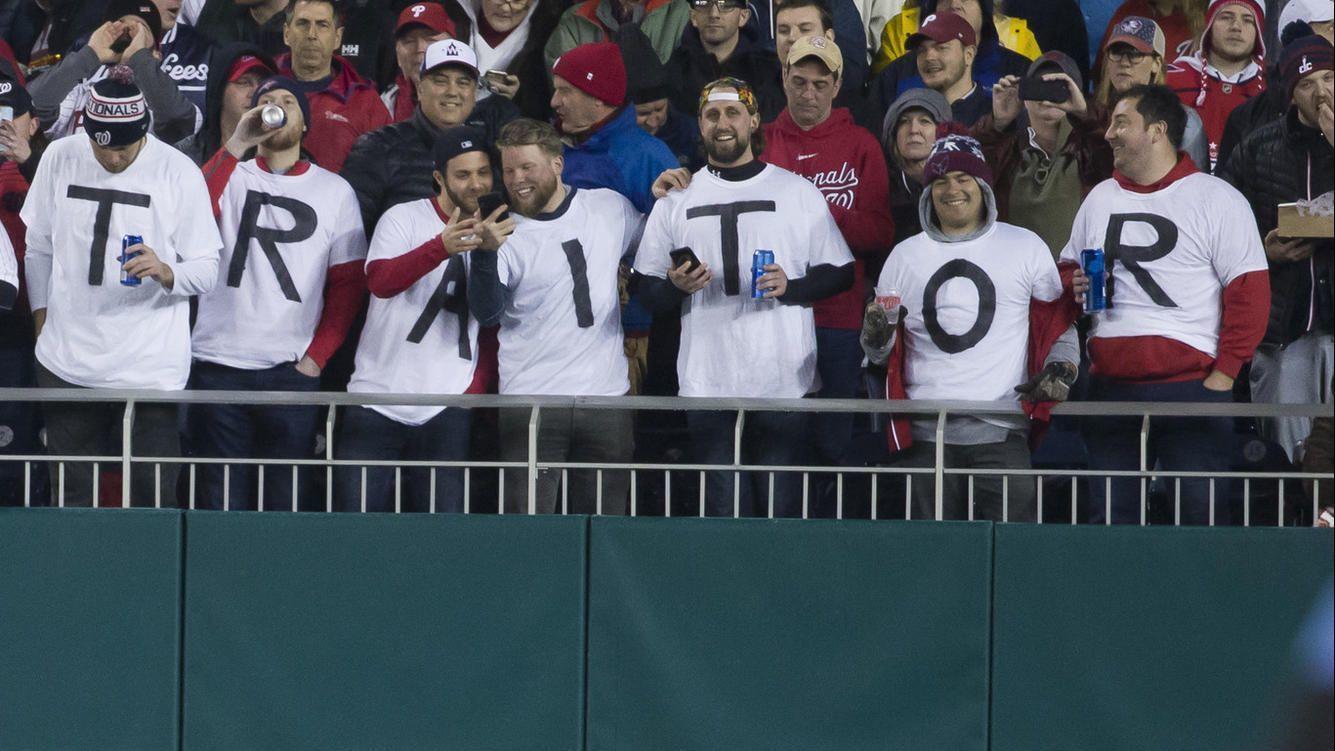