The baseball world has anxiously awaited the results of the autopsy that would shed light on the mysterious cause of death of Tyler Skaggs. Those results came out on August 30th and the results revealed a dark truth about the cause of Skaggs’ tragic death.

The Coroner Report revealed that Skaggs had traces of Fentanyl, Oxycodone, and Alcohol in his system prior to his death. Skaggs ultimately died by choking on his own vomit. The coroner put it less bluntly by saying the death was caused by “alcohol, fentanyl and oxycodone intoxication with terminal aspiration of gastric contents.” The death was ruled as an accident when he was found in his bed fully clothed with no signs of trauma. 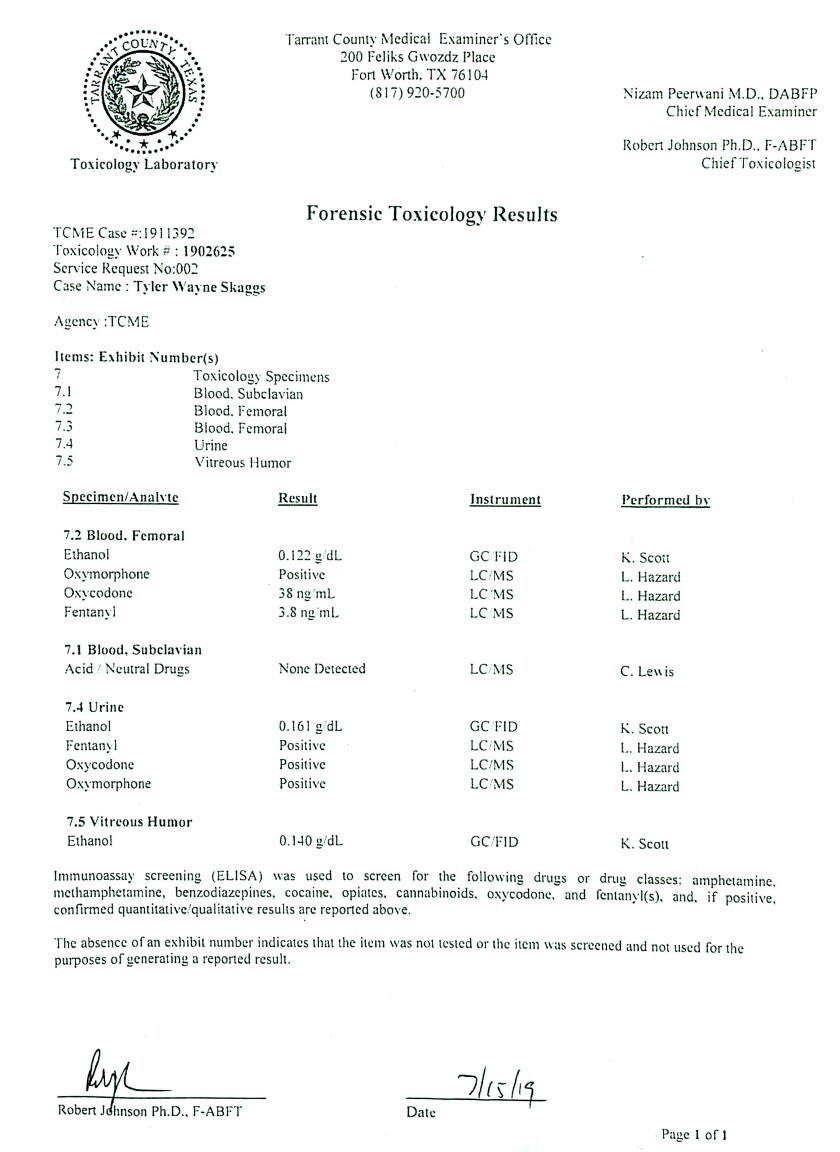 “The level of fentanyl is a significant amount that could produce death,” said Cyril Wecht, a Pittsburgh forensic pathologist. “In this case, oxycodone and alcohol were also present and would have contributed to the death because they are also central nervous system depressants.”

In the two-paragraph statement released through legal counsel, the Skaggs’ family revealed that an unnamed Angels employee was tied to an ongoing investigation by the Southlake Police Department. Major League Baseball claimed the league was unaware of this accusation and will launch its own investigation.

“We are grateful for the work of the detectives in the Southlake Police Department and their ongoing investigation into the circumstances surrounding Tyler’s death. We were shocked to learn that it may involve an employee of the Los Angeles Angels. We will not rest until we learn the truth about how Tyler came into possession of these narcotics, including who supplied them. To that end, we have hired attorney Rusty Hardin to assist us.”

The type of drugs that were provided to Skaggs is also reason to warrant an investigation into who provided them and why. Oxycodone is banned pursuant to Major League Baseball’s Joint Drug Agreement. Fentanyl is also classified as a “drug of abuse” under the agreement. This will certainly be a major topic of discussion in the coming months as more and more light is shed on this tragedy.

“I can just say that we were saddened by that report that came out and completely heartbroken,” Angels General Manager Billy Eppler said. “Everyone is searching for facts, and everyone in the organization wants facts, which is why we are actively cooperating with an investigation.”

Eppler would go on to say that while the results are heartbreaking, this news will have no effect on Skaggs’ legacy to him personally.

“We miss Tyler every day. That clubhouse misses him every day,” Eppler said. “We miss him in our lives, and we pray for him and his family every day, and we pray for our own healing, as well, and nothing that we learned today changes those feelings, not one thing. But this is like a shot to our core, and it brings back a lot of pain from that tragic day.”

Heaney said he was unaware as to whether or not Skaggs had issues with opioids.

“It hurts, the circumstances around it,” said Heaney, who last saw Skaggs on the team bus from the airport to the Texas hotel where he died. “We don’t have answers. Nobody has answers.”

Skaggs was a fan and team favorite. He served as one of the Angels’ most reliable pitchers in 2019, going 7-7 with a 4.29 ERA through 15 starts prior to his death. He was 28-38 with a 4.41 ERA during a seven-year major-league career that was constantly being interrupted by injuries. Skaggs lost time to elbow surgery in 2014 and several other injuries in subsequent years.

Angels’ manager Brad Ausmus was asked a question regarding the prevalence of opioids in the Angels’ clubhouse and said: “Quite frankly, I had to Google what fentanyl was. I don’t really know much about it. You read about opioids being an issue both culturally and of course post-surgically for athletes. But I can’t say I’ve ever seen it or noticed it being a problem. Not that I’m qualified to recognize the signs, but I would say no, I haven’t really seen it.”

With all the prior injuries and pain that Skaggs was clearly in, it is not surprising that the cause of his death at the ripe age of 27 was related to pain killers and system depressants. The combination that Skaggs was taking was extremely lethal and an accident waiting to happen.

Now that the dark truth surrounding Skaggs’ death has been revealed, the fallout could be tremendous. Multiple investigations will be done to find out the full truth of the matter and a huge legal battle could be on the horizon.

There will certainly be more to this story and as this story develops, regardless of personal beliefs and opinions, these are tragic times. Regardless of the cause of Skaggs’ death, we must all remember what a great man he was and all the lives that he touched. Skaggs will forever be missed and the writers of Doubleday Double Talk send out thoughts and prayers to the Skaggs family and everyone who was ever touched by his life.