The New York Mets kicked off 2018 by winning 11 of their first 12 games, since then, the Mets have been the worst team in the National League with a 29-56 record and a .327 win-loss percentage since their hot streak. The Mets went from being the best team in baseball at the beginning of the season to have a 0.1 percent chance of making the Postseason altogether.

With the Trade Deadline just a few days away, and the Mets’ season virtually over, it is time for the Mets to make the smart decision and trade superstar pitcher Jacob deGrom.

Jacob deGrom has had an unbelievable season in 2018, posting a 1.71 ERA with a 5-5 record, 159 strikeouts, a .967 WHIP, and a 6.1 WAR through 131.1 innings pitched over the course of 20 starts. deGrom was selected to play in his second career All-Star Game and has been putting up Cy Young Award-worthy statistics. The only blemish on the former Rookie of the Year Award recipient’s stat sheet? His 5-5 win-loss record which is a result of the lack of run support that deGrom receives on a nightly basis from the inept Mets offense. 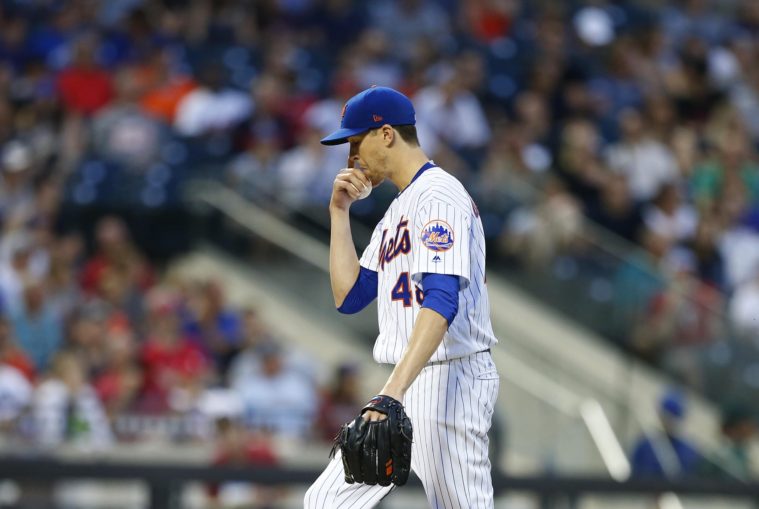 Despite the Mets’ Assistant General Manager John Ricco saying the Mets are “still engaged” and “still having dialogue with some teams” as far as trading deGrom is concerned, Ricco has also been on the record saying, “We love him,” and “We know what we have. In order to move him in a trade, it would take an awful lot.” While New York would obviously love to keep deGrom around, they are doing more harm than good for both deGrom and their franchise going forward by keeping him.

After the Mets traded Jeurys Familia for a pair of prospects and some cash considerations, it is clear that the Mets are preparing for the long haul, because of this, trading deGrom should be their next move, and in this article, you will be given a few reasons why. So, let’s begin.

Jacob deGrom currently leads all Major League pitchers in Wins Above Replacement (6.1), ERA (1.71), and Adjusted ERA+ (222). In addition to this, deGrom is within the top ten in Major League Baseball in every Major pitching statistic with the exception of Wins. To put it in the simplest terms possible, you are currently witnessing peak Jacob deGrom. His fastball, changeup, and curveball all rank within the top fifteen in baseball and to be realistic, there is no way that deGrom will ever be worth more on the open trade market than he is right now.

deGrom additionally has had issues with injuries after having Tommy John surgery in 2010 as a Minor Leaguer, hitting the disabled list with “rotator cuff tendinitis” in 2014, having his season ended early due to elbow surgery in 2016, and missing time earlier this year with a hyperextended right elbow. With deGrom’s injury history, it is not unlikely that he could get hurt again and if he does, it could be detrimental to his trade value.

deGrom is 30-years-old, healthy, and putting up incredible numbers, meaning that this could end at any point due to injury, age regression, or just not being able to keep up with the numbers he has put up thus far. There is no better time to trade deGrom than right now and if the Mets refuse to trade him before the deadline, they could be cheating themselves out of an incredible return of prospects.

The three best starting pitchers on this year’s starting pitching trade market with the exception of Jacob deGrom are Cole Hamels, J.A. Happ, and Nathan Eovaldi. These three pitchers are (despite being big names) very bad options for teams that are one stud starting pitcher away from a Postseason spot or World Series contention. None of these three have an ERA better than 4.18 (J.A. Happ) and none have a WAR of more than 0.9 (also J.A. Happ). While J.A. Happ is a good option, he is not a great one. This also goes for Hammels who is currently owning a 4.72 ERA and Nathan Eovaldi who has started just 10 games in the last 2-years. These are very uninspiring options for most teams, and these are the cream of the crop.

Because of the current lack of star power in the starting pitching department, teams will be more willing to put more effort in to acquire deGrom, making him an extremely sought after commodity on the market (especially in the eyes of Playoff contenders) and one that the Mets should take advantage of.

Let’s face the tough reality of this matter. The National League East Division is now the property of the Philidelphia Phillies and Atlanta Braves. With the Washington Nationals losing key pieces to Free Agency this offseason, their reign over the East will be no more starting in 2019. Additionally, the Atlanta Braves and Philadelphia Phillies have both finished their rebuilds one year ahead of schedule, meaning that the East will be a two-horse race for the next 3-5 years while the Nationals, Marlins, and most likely the Mets are rebuilding. The Mets need to begin their rebuild now, and trading deGrom would certainly speed up the process for New York. To be blunt, the Mets need to throw in the towel for the next few seasons and begin the long haul.

The Return For deGrom Would Be Insane

Major League Baseball is loaded with young prospects and plenty of teams would be willing to give up some of their future for a couple of years of deGrom. A pitcher that can go out every fifth day and put a team in the best position to win is a highly sought-after commodity and a pitcher of deGrom’s stature is worth a tremendous amount of young talent. Ricco stated that in order for the Mets to trade deGrom, it would take an “overwhelming deal” and with teams such as the Yankees, Astros, Dodgers, Red Sox, Brewers, Cubs, Braves, Phillies, and Diamondbacks desperate to get an edge over their Division Rivals for a chance to win it all in October, there is no telling what these teams would be willing to give for deGrom, and the prospect payout for the Mets would be huge. The Mets need to build for the future, and the payout that deGrom would provide for New York would be well worth losing deGrom.

While trading deGrom would be a shot to the heart for Mets fans, it is in the best interest of the ballclub and if the New York Mets front office cares about the franchise’s best interest, they will give up their present and build for their future. Losing sucks, no matter how you look at it, but if the Mets go through a few 90+ loss seasons and at the end of it all hoist a World Series trophy above their heads, it would all be worth it.