“It’s 715. There’s a new home run champion of all time, and it’s Henry Aaron. The fireworks are going, Henry Aaron is coming around third, his teammates are at home plate, and listen to this crowd…”

That might be the moment most people think of when they think of Hank Aaron, but to do so would be neglecting so much more. He is 3rd all-time on the Major League Baseball hits list, 2nd of course to Barry Bonds in home runs (some would so arguably), 1st in RBI, 1st in Total Bases with 700 to spare over 2nd place Ty Cobb, and 3rd in games played overall. Also impressively, his 1,383 strikeouts. By contrast in about 800 fewer games, Jim Thome struck out roughly 1,200 more times.

On top of what he did on the field, he was seen as a Civil Rights ambassador. From humble beginnings in Mobile, Alabama Hank Aaron never let adversity slow him down.

He described his hitting approach this way: My motto was always to keep swinging. Whether I was in a slump or feeling badly or having trouble off the field, the only thing to do was keep swinging.”

Certainly, there is some hyperbole to making things that easy as his contact rate numbers suggest above, and the fact that in addition to breaking Babe Ruth’s home run record he also is one of just 6 men in baseball history with 3,000 hits and 500+ home runs.

As Hank Aaron came close to The Babe’s record in 1974, he encountered racism on a vicious level. Even though Jackie Robinson had integrated baseball in 1947 – keep in mind the Civil Rights Act wasn’t enacted until 1964. Still, racism persisted especially for a player who called the Deep South home. He received death threats from many who did not want a black man to beat Babe Ruth’s record. Hank was not very outspoken but made his point when it was needed. He also joined the chorus of black players who talked about lack of blacks in leadership following their playing career:  “On the field, blacks have been able to be super giants, but once our playing days are over, this is the end of it and we go back to the back of the bus again.”

Hank would go on to roles with the Atlanta Braves front office, where he continues to serve. This summer, Giuseppe and I had the opportunity to attend the Hall of Fame Induction ceremonies which included a parade. Hank Aaron was second down the line, and seeing him was a great reminder of baseball’s rich history. This game is all connected – and though 1974 was over 40 years ago – it also isn’t so far gone that the hero has left us. 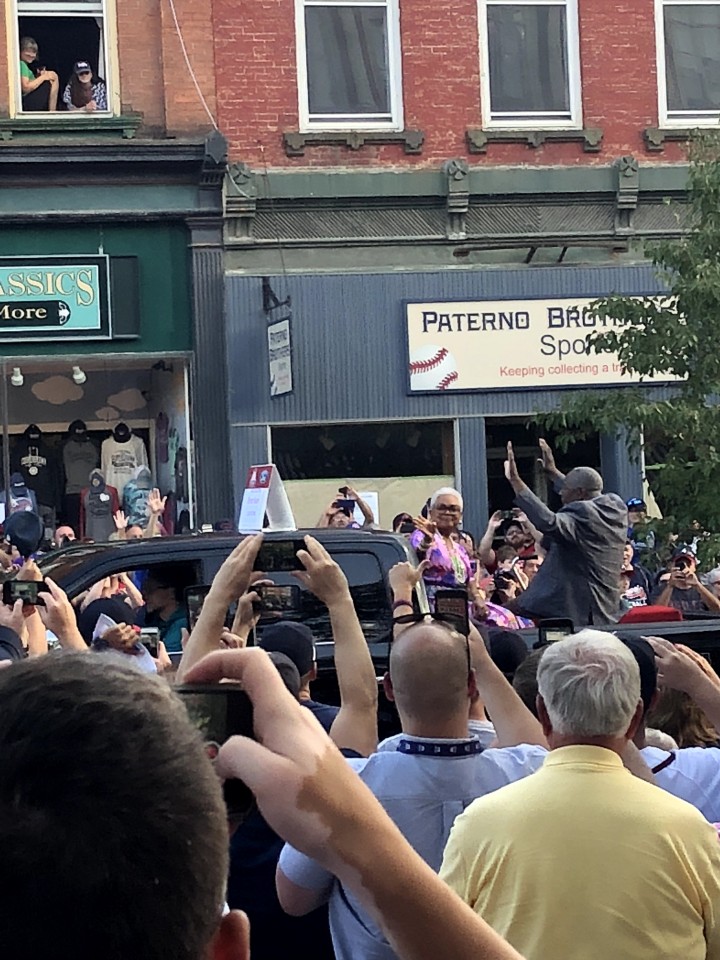 There was a lot of speculation about how Hank would feel when Barry Bonds inevitably broke his record of 755 home runs as a cloud of PED suspicion hung over Mr. Bonds. Aaron wasn’t there in person – as is often the case – but did send a pre-recorded video message congratulating the slugger on his achievement. However, Hall of Fame voters have not been as gracious to Barry.

Hank Aaron is a special person that also happened to be one of the greatest baseball players ever. Though most consider Willie Mays the better all-around player, when it comes to connecting with a baseball, there haven’t been many better than Hank Aaron.

Braves fan my whole life, Padres since I went down to UC San Diego for college in 2001. Petco Park is like a little bit piece of heaven here on Earth. Currently living in Oregon. View all posts by Daryll Dorman